Maternity Outcomes Matter (MOMs)
Partner/Affiliate (2018-present) with this group project to reduce avoidable harm to mothers and babies which occurs during maternity care. 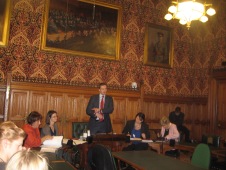 All-Party Parliamentary Group on Maternity (APPGM)
(2010-2012)
“Membership of the Group is open to non-commercial organisations and individuals with an interest in maternity care.”

In 2009, the NCT still provided the secretariat function for the MCWP (below), the NCT’s President chaired the APPGM, and the NCT provided the secretariat function for the APPGM too. In 2010, new chair (and former obstetrician) Daniel Poulter MP was appointed. After attending meetings in London (one titled, ‘Are Caesarean Section Rates Out of Control? How do we reduce them?‘), I repeatedly asked for the opportunity to speak (as a homebirth advocate, introduced by the NCT, had done). Mr. Poulter advised that my request must be via my MP (Jeremy Hunt) and go through the NCT. I did both of these, to no avail, and it took 10 months of correspondence for my website to be included on the APPGM ‘Useful contacts‘ page. In August 2012, the RCOG, RCM and NCT advised all CCGs to form ‘a clear action plan‘ to increase their normal birth rate, reduce epidural use and reduce caesarean rates to 20%. In October 2012, Mr. Poulter stepped down as chair.

Coalition for Childbirth Autonomy (CCA)
(Member 2008-2010)
Group of four organisations campaigning for a full spectrum of birth autonomy (together with the BTA, BTC and c-sections.org)
2008 Press release WHO Admits: There is No Evidence For Recommending A 10-15% Caesarean Limit (October 26, 2009)
2009 Press release Birth Group, CCA, Calls on WHO to Re-examine ‘Outdated and Unsafe’ 10-15% Recommended Caesarean Rate (November 7, 2008)

Maternity Care Working Party (MCWP)
(2009-10)
Contacted Sandra Gidley MP, Emily Thornberry MP and NCT regarding membership when MCWP (the expert group for APPGM, above) described itself as “an independent, multi-disciplinary body that campaigns for improvements in maternity care.” No response from MPs. (August 2009)

Attended first meeting and received revised description from NCT Public Policy Officer: MCWP now described as ‘an independent, multi-disciplinary body that works to promote normality in childbirth… The MCWP aims to achieve consensus among stakeholders in maternity care… Members are expected to be fully in support of this updated purpose…” (March 2010)

Without agreeing to this, Caesarean Birth could only be a ‘guest/observer’, with no automatic right to place items on the agenda and any brief contribution allowable only at the discretion of the NCT Chair. (June 2010)

MCWP Chair advised: “If you are not in agreement with this policy or the aims of the MCWP to promote normal birth, I wonder whether this is the right group for you to attend at the present time.” (September 2010)

MCWP Chair also said she noted and appreciated my position on planned caesarean birth but did not think the MCWP was the place to raise these issues: “To be a member of the working party you need to be willing to accept its terms of reference and to contribute to its activities in a way that takes forward its aims. As yet you have not confirmed you can do this. Therefore we cannot accept you as a member. … the group has been set up and runs with a particular remit.” (October 2010)

Other former members, including the BTA, resigned from the MCWP.

In 2010, the NCT published ‘Normal birth as a measure of the quality of care‘.

In 2007, the RCM, RCOG & NCT had published the MCWP’s ‘Making normal birth a reality Consensus statement from the Maternity Care Working Party‘, which concluded, “Interventions and caesarean should not be the first choice – they should be the last.”

In 2006, the RCM education and research committee proposed an epidural fee “to improve the normal birth rate“.